Savitar has over 20 experienced and highly skilled coaches at your disposal, each with their own specific skill sets. Take a look 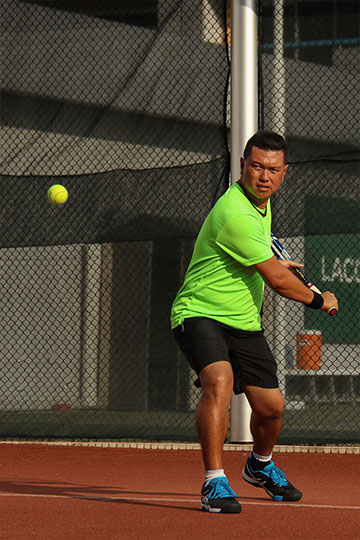 A coach known to be adored by all the little boys and girls on court is our coach Adrian! With his energy level alongside the junior players, you cannot help but try and keep up! For the past 20 years, the Singaporean-born, Adrian Ng has been a prominent tennis coach with a wide-range of experience teaching both kids and adults of all ages and levels. He has coached in multiple high-end hotels, private clubs, and international schools including, Swiss Club, One Degree 15, Dulwich College, and the Shangri-La. As head professional, Adrian’s bases these days are at UWCSEA East campus, and at Savitar Tennis Centre HQ at Fairmont Hotel! 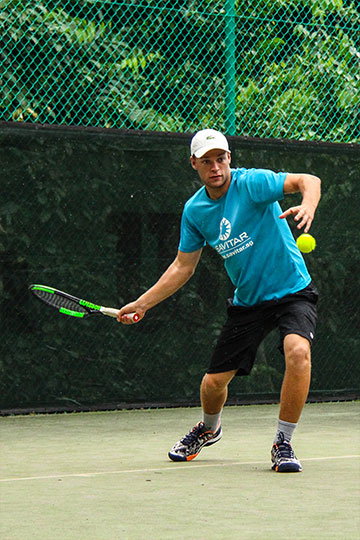 Michael Saunders from Christchurch, New Zealand. Michael is Director Junior Performance Tennis at Savitar Tennis Centre,HQ. He played NCAA college tennis at Newberry College in South Carolina for four years, where he attained a Bachelor of Science in Sports Management and Business Administration. Michael brings with him a huge passion for the game; he has been sharing this enthusiasm and knowledge with students for the past 6 years at various clubs and academies across the USA and New Zealand. 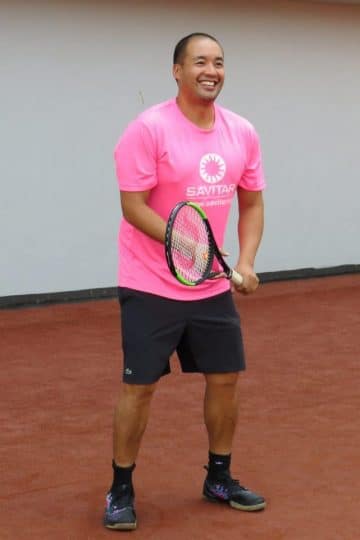 A Vietnamese born Dutch, Jim truly embraces the ‘best of both worlds’ in his life, including his current positions at Savitar as Director of Tennis/Coach at the Singapore American School.  As of recent, Jim kickstarted the Adult Team Tennis concepts, which consist of Tennis Boot Camp and TGI Friday Tennis.
Jim’s experiences and qualifications include: 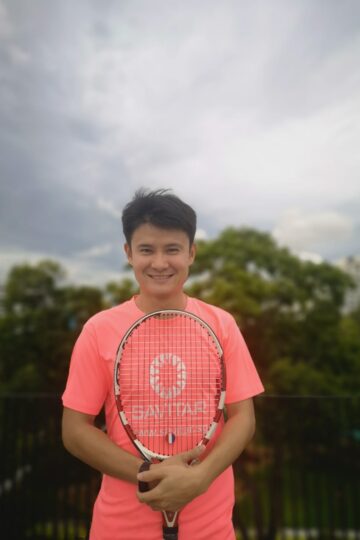 Benjamin is Singapore-born local talent, he has been a prominent tennis player participated in junior college level. After finishing NS Benjamin left Singapore to study in US where he gained his full sports coaching certification from USSA, majoring in Tennis. 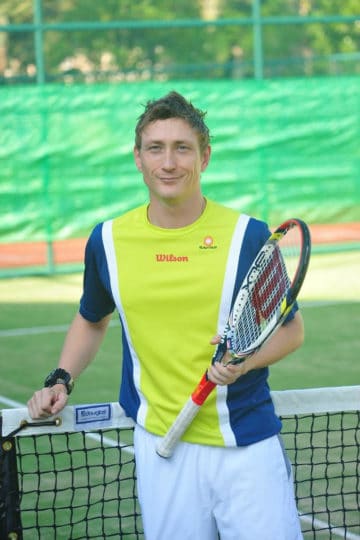 Savitar welcomes James Corin as the Director of Tennis for Hotels and Resorts of Singapore. He brings a wealth of global experience to share with you at our central locations of Grand Hyatt Hotel, Singapore! Originally from the UK, James completed a National Diploma in Sports Science and went on to gain a degree at UWIC Cardiff, in Sports and Leisure Management whilst playing university tennis and competing in Welsh Premier league teams.

After University, James’ coaching career took him all over the world in a variety of roles held at 5-star clubs and resorts. His roles include Junior Development co-ordinator at the world-renowned Jumeirah Beach Hotel in Dubai, Head of summer camps in Atlanta, USA and Director of Tennis at the exclusive Al Bustan Palace in Muscat.  He also coached at La Samanna Resort on the Caribbean Island of St Maarten and most recently at the Outrigger Laguna Phuket Beach Resort in Thailand where he built and ran an exciting and popular program of coaching and events.

James looks forward to hearing from you: [email protected] 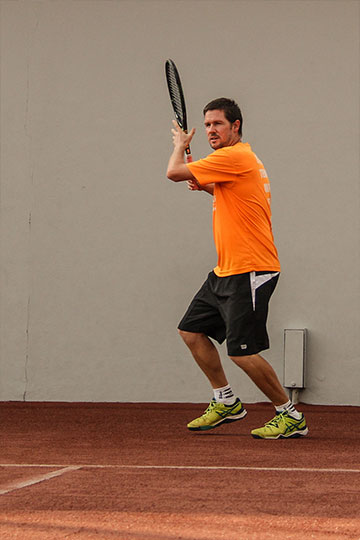 Originally from New Zealand, Adam Branks comes to Singapore with years of tennis experience. Adam was first introduced to the sport at an early age through his family’s legacy. Adam’s father ran a large tennis school in Auckland and that is where he learned and developed the passion for the sport.

Adam has coaching experience in the United States, New Zealand, and now working with Savitar at the Swiss Club and Willow Stream Spa Tennis Facility.

His other qualifications include: 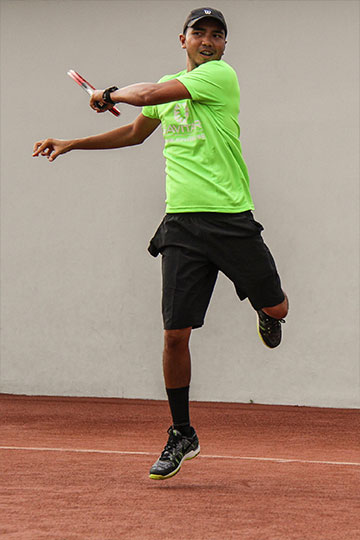 Paul is Director of Tennis,Oneº15 Marina Club in Sentosa. Paul’s strong passion for tennis clearly transfers over to the juniors and adults in the tennis programs. With Paul’s enthusiasm and knowledge of the game, Millendez has proven to be one of Savitar’s most loyal and top coaches.

At the prestigious University of Saint La Salle – Bacolod City, Paul continued his on-court success, receiving a full tennis scholarship. Paul earned his Bachelor of Science degree in Nursing and is a registered nurse.

His other qualifications include: 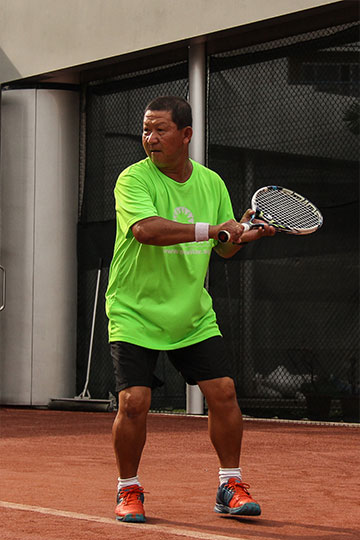 If you have met our coach Kan Tsi Kwong, you know that his smiling personality has been with us at Savitar for almost 10 years! But for over 20 years, he has been highly involved in the game of tennis. As a junior player, Kan represented and competed for Anglo-Chinese School in Malacca, Malaysia and other parts of Asia. His extended coaching career began when he was recruited to teach at the Singapore Sports Council/Robertson Wilson Junior Tennis Training Scheme. Soon after, he earned his Tennis Instructor Certificate from the Singapore Sports Council and Singapore Tennis Association (STA). He then continued on his pursuit to be a professional tennis coach and trained to receive multiple accredited certifications such as:

Coach Kan has assisted in developing numerous junior and adult tennis programs at Savitar and continues to introduce the game of tennis to young players in Singapore!

YANNICK GUBA has come to us from Beijing, where he was Head Tennis Coach at a leading American Tennis Academy and International School for the last 4 years. Prior to that he was the Assistant Coach for the School Varsity Team UAAP in Manila Philippines and coached many of the top players in the Philippines. Yannick has also been a travelling coach for 14/U ATF and ITF players. Yannick has represented Philippines at Davis Cup, senior and junior level.

Yannick is the Full Time Tennis Coach for MCM, and will be living on site throughout the year, coaching all school teams, groups, school curriculum tennis classes, holiday camps and private lessons. 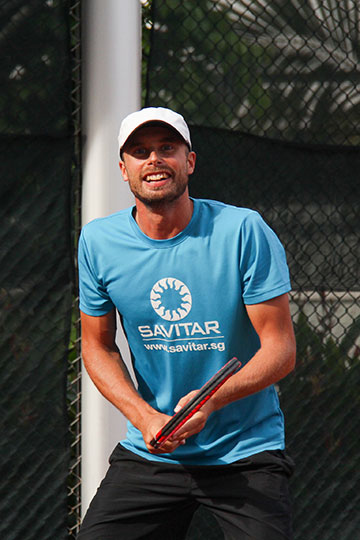 Goran Ahlstrand is Swedish , and as with most Swedes, grew up with a tennis racket in hand. He started playing at the early age of 5 and spent many years playing competitive tennis. He has always had a passion for the sport and started his coaching career in Shanghai, along with running his own company. He moved to Singapore in 2015 and has been coaching juniors and adultsat the Savitar Tennis Centre and Singapore American School. Goran was also managing the tennis programmes, specifically the group programmes, at the Singapore American School.  Goran has obtained a PTR certification and the AATC accreditation level 1 and 2. 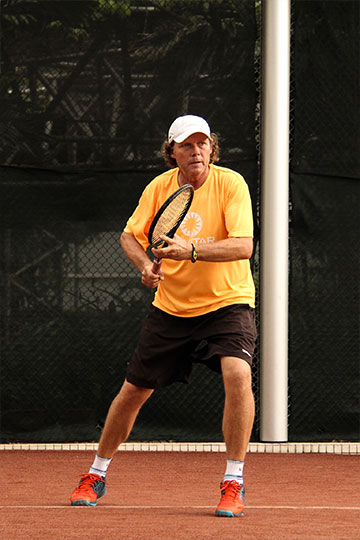 An Australian and Dutch citizen, Frank Bruinsma has over 25-years of tennis playing and coaching experience. Frank has coached all over the world, including Australia, United States, and nowhere in Singapore.

For the past 14-years, Frank has worked with and for some of the most prestigious private clubs in Singapore, which include: the Hollandse Club, the Swiss Club, the Pines Club, the Amrita Spa Tennis Club, and the Tanglin Club.

Frank’s strong tennis background and knowledge has allowed him to develop lasting relationships with the club members and students here in Singapore. He has also developed strong junior tennis and adult programs throughout the Singapore region.

Frank is the Managing Director of Savitar Pte Ltd. 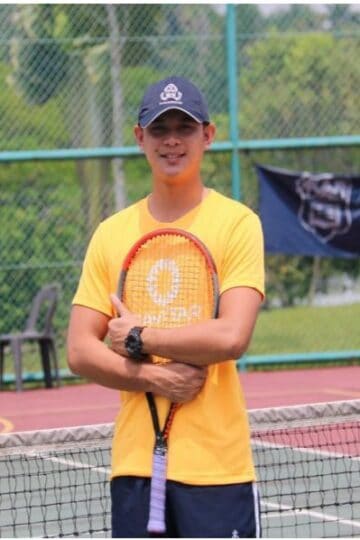 Paulo Baran hails from the Philippines where he was a prominent
member and key player in their local tennis community. He established
himself as a star player and successfully achieved and cemented his
place as #1 in the region during his secondary education. Not only that,
Paulo has always been in the top 10 of his country from U12-U18. He
also became the top seed in the men’s doubles and singles category. He
was the first Team Captain to finally lead his university to a
championship. Right after graduating, he became the Assistant Coach
for his Alma Mater’s Varsity Team UAAP in Manila, Philippines.
Paulo has been with Savitar for two fulfilling years and is based at
Marlborough College Malaysia as an Assistant Coach, providing
assistance with coaching of all school teams, school curriculum tennis
classes, holiday camps, and private lessons. 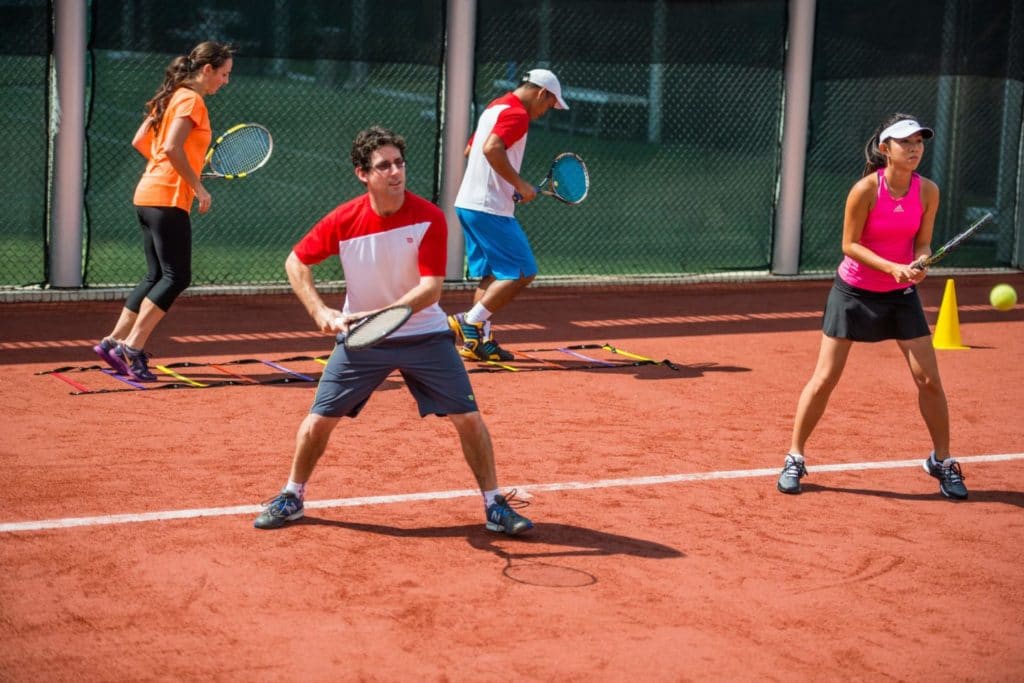 We are back in action

Please check our Facebook page for the latest promotions

I wanted to thank you and the broader team for organizing the kids to watch the WTA. It was a great experience and they were very lucky to be able to go as a part of the team and really experience world class tennis!

My son has had the privilege of working with the Savitar coaches at UWC for the past 7 years. Niki Tippins and her team of coaches – Johan, Roberto and Patrick have done a brilliant job of teaching him life skills. I thank the Savitar coaches for their dedication to its players and the sport.

Thank you so much to you and all your staff for a wonderful camp. Hugo loved every minute of it and was keen to go every morning despite the heat so that was fantastic. I loved yours and the coaches organisation and commitment. Greatly appreciated!

I am so impressed with everything you have put in place and your passion for tennis, the programme and wanting tennis to progress really shows. Thanks for everything you are doing.

We are absolutely delighted with your program. The kids will be playing a lot over the summer to keep the level up.

I have had an amazing learning experience with coach Wena at Savitar. She’s skilful, funny and most importantly patient. Everyone learns at a different pace. It is very important that a coach knows how to tailor the lessons to suit each individual. Besides picking up tennis skills, I have certainly enjoyed the learning process. And because I enjoy it, I have more and more interest in the sport. I did not sign up tennis lessons to become Novak Djokovic. I wanted to have fun and coach Wena made sure of it!

We came for the trial class on Saturday and it was a great success. After my son’s enthusiasm being at sub-zero levels and tears on arrival, Adam managed to turn Oliver around and he absolutely loved the session.

We just completed our set of 6 classes yesterday – I enjoyed myself tremendously! The team at Savitar is really professional & very nice to learn from. Just 6 sessions & I already feel I have improved a lot.

Just to let you know that my kids thoroughly enjoyed the tennis camp and would definitely sign up for similar camps in August. 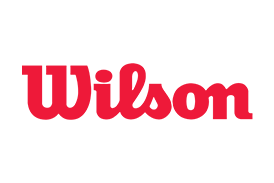